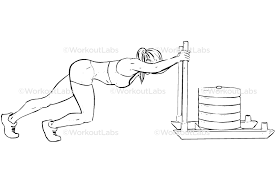 Recently, I wrote a story about your one resolution you should use in the new year.  The theme was that whatever you wanted to do in 2023, go all in.  Yes, simply go all in.  Twelve months can move fast and if you go all in, it will move even faster.

As I wrote that article, I kept replaying in my mind something I saw at the airport recently.  It was a mom and dad with, I am guessing, their  year old son.  They were sitting across from each other and were encouraging him to walk.  When he got close, his dad would say, “You’re almost there.  C’mon, you are almost there.”  The baby would make it and collapse in their arms, they all cheered and they would do it again.

Then I went back to a moment with my son in the gym when he was pushing the sled and he was on his last rep.  He had about ten yards to go and I kept telling him to “go, go go, you are almost there.”  He was able to finish pushing the sled across the line and he also collapsed, just not into my arms because he was all sweaty.

I then compared the two and thought, what if they just stopped and said, nope, not going to finish?  Then the goal would not have been accomplished.  I loathe the words “so close,” because that means you didn’t make it, or finished what you started.  It is also used as comfort words when someone is trying.  I am still not a fan.

I have seen other examples of “almost there,” and they came pouring out.  Seeing my kids ride a bike for the first time without training wheels and telling them they are almost there and see them light up when they do finish.  If they had stopped and not gone the extra step, that jubilation would have never surfaced.  I saw and it was beautiful.

You will come upon situations in this new year with your GO ALL IN mindset and think that you cannot go any further and you would not be more wrong.   Almost There is something you can take with you where ever you go and in whatever you do.

Recently, I have written two books and the second one was not as easy as the first one. All this self-doubt and checking and double-checking and checking again to see if it was what I wanted and then I shelved it for weeks.  Reality was that I was almost there in completing it and all these moments I have witnessed of going all the way when they were almost there, hit home.  In a large way.  I refocused, finished and got it done.

So when you here someone yell at you that you are almost there, you are.