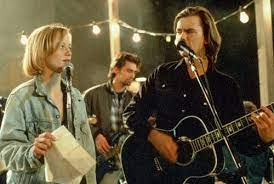 Twenty-eight years ago this week, the movie, “The Thing Called Love,” was released in the theaters.  Don’t worry yourself on whether or not you remember it, because a lot of people didn’t.  In fact, according to the website IMDB, it cost $14 million to make but only made more than one million.

It was a movie about young songwriters who moved to Nashville to make it in the music business and this was twenty years before the TV show Nashville, came around.

The whole thing was shot in Music City and the cast that was attached, you w0uld have thought it was a no brainer to do well at the box office.  This movie is proof positive that the story makes the movie, not the cast.

Anyhoo, on one fall Nashville night, their world collided with mine.

It was Tuesday, October 27th, 1992 and I was working at the greatest night club of all time, The Wrangler.  Yes, I vividly remember because my birthday was two days before.

On this evening, I was the DJ and the bouncer because it was not that crowded and most of the staff went home.  Around 11, a young lady walked in who I recognized but could not place her.

“Need to see your ID ma’am.”  I will never forget her reaction.  “Ma’am?  Y’all do take that southern hospitality to heart.”  I checked her license, Samantha Mathis.  Still not ringing a bell.

The guy who walked in a few moments later, immediately recognized him.  River Phoenix.  He and Mathis were evidently dating at the time and I checked his ID, just to make sure, and let them in.

Then, about 5 minutes later, about 10 more from the cast came into The Wrangler  and I didn’t recognize a single one.  Remember, no cell phones back then.  No internet.  Nothing.  Plus, it was now about 11:30 and we stayed open until 2 A.M.  I went back into the DJ booth and was probably reading the paper and trying to figure out my fantasy football team.

“Excuse me, do you mind playing some rock and roll?”  I looked up and River Phoenix had walked into the booth.  We made small talk and he went through the CD’s to pick out what he wanted to hear and told me he was shooting a movie and although he loved country music, he wanted to rock out.

I went back about my business and then, someone walks in the booth and asks, “So do you know what is on every single CD?”  It was a very attractive brunette who almost spoke in a whisper.  “I could never do this job.  And to keep everyone on the dance floor and having fun, nope.”  I laughed and showed her a sheet that kept beats per minute, BPM, and told her you just gradually increase that every set and then, slow it down.

I asked if she was with the cast and she said yes and had a small part in the movie but went back to asking about being a DJ.  She ended up putting on the headset, picking out CD’s, playing the music, controlling the lights and everything else.  I left the booth and went to the dance floor and let this lady run the show for awhile.

They seemed to have an outstanding time, especially when someone taught them a line dance and yes, Achy Breaky Heart.  They stayed until close and asked where they could go eat and I pointed them to the Waffle House down the road from the Wrangler on Murfreesboro Rd.

They all hi-fived on the way out the door and the brunette, who spent most of the evening in the DJ booth, ended up being Sandra Bullock.  She said they would all come back when they get another break from filming because no one bothered them while they were there.

Well, they never came back and that was OK and imagine my surprise when a year and half later, there is my DJ buddy in the movie Speed.  In fact, she was in 9 movies the next two years.

Sadly, none were about a up and coming DJ at a country bar that had a very handsome man who showed her the ropes and the way.   Perhaps that is why she made Hope Floats.

Or perhaps not.  Let’s go with that.