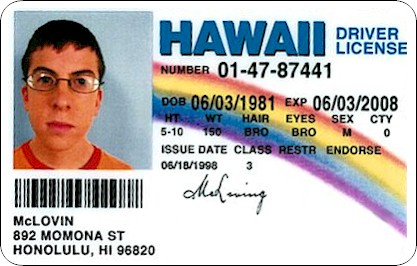 Every year when spring break rolls around, I go back to an instrumental moment in my life that I am most sure if my mother had known, I would still be grounded.

I am talking about the time I went and got a fake I.D. made and the first time I used it.  Nervous. Anxious.  Terrified.  No clue what I was about to do, although I had seen it done several times.

What if it all goes horribly wrong? What if someone walks in and says something? Would I be so nervous, I couldn’t go through with it? God, I am sweating already and it hasn’t even started.

You never know until you try right?  Here we go.

I reached into my back pocket and pulled out my wallet.  Joe, don’t hand him your real I.D.  Hand him the fake I.D.

I grabbed the 12 pack, walked outside and around the building to the car. I get in and say, “Drive.  Just drive.  Get away from here before we get caught and go to prison.”

Victory! I just bought my first 12-pack with a fake I.D.  In Panama City, too. On a high school spring break trip.

It was 1985 and someone had said that in a certain store you could go in, pay about twenty-five bucks and get a state of Florida fake I.D.

We loaded up, went to that store, scared to death and asked the guy if did fake I.D.’s.  He said yes, made us write all the information on a piece of paper, took our picture, our money, and the next thing you know, I had a fake I.D.  I had never seen or held gold but at that moment, it was in my hand.

Do you remember your first fake I.D.?  It was like gold in your pocket.  Invincible. Bullet proof.  You were all of that and more.  Let’s go back in time again. It worked perfectly in Florida, but here was the big question.  Would the fake I.D work back in Nashville?

There was an S.D.I. market near where we lived in Hermitage.  Let’s try it there and see if it works.  Nothing ventured nothing gain, right?  Fortune favors the bold?  Whatever inspiration you could think of.  It did not help, I was still scared to death.  I placed a six pack of, once again, the cheapest beer I could find on the counter.

Joe, run.  Just run and get out of there, but before my brain relayed that message to my feet, this happened.

“Cool.  My girlfriend’s mom lives over there.” “Hey.  It is a small world.” I am positive that I sounded just like Pee Wee Herman.

I used this I.D. for the next year until I returned to PCB and got one that had an actual city and address on it.  Funny, the first time I used the new one, I got it taken away from me trying to get into a club in Nashville.

I had kept the old I.D. just in case and never had a problem again.  I used it until I turned 21.